No need to go to Nepal. Just head over to Cambridge.

Fun fact: Mount Everest is located at the same latitude as Orlando, Fla.

So then it’s not hard to imagine that the Himalayan glaciers are melting at such an alarming pace that the melting water from the glaciers contributes to the needs of more than 1 billion people in Asia.

Want to see it? No need to fly to Nepal. Just go to Cambridge.

“Rivers of Ice: Vanishing Glaciers of the Great Himalaya” showcases contrasting photographs of the mountains taken by explorers back in the early 1900s, with most recent images taken by mountaineer David Breashears. Step into the 360-degree comparison between 1921 and 2008, and you’ll get the chills.

The collaboration between the MIT Museum, GlacierWorks and the Asia Society, funded by the Prince Albert II of Monaco and the Farvue Foundation is showing now through March 2013. That’s plenty of time to go see Mount Everest.

There were models, models, everywhere, at last night’s event.

Yesterday was the 237th anniversary of Paul Revere’s ride through Boston — a serendipitous date for the launch party of the new boutique hotel named after the Patriot (and not the North Shore town): Revere. The 200 Stuart St. location was formerly a Radisson.

To celebrate, organizers sent climbers from Boston Rock Gym repelling down the side of the building in Ted Baker suits and hotel uniforms designed by Mass Art — a vertical fashion show, if you will. Guests sipped champagne and watched the spectacle through binoculars. Models also walked down a runway set up on Revere’s roof deck.

In addition to the deck and rooftop pool, the hotel also features 365 guest rooms, a 225-seat theater/venue, and a soon-to-open “Wizard of Oz”-themed nightclub, the Emerald Lounge.

(All photos by Renata Brito)

Engineering students: Time to start brushing up on your Portuguese.

Boston will soon see a little samba added to its stakes in innovation and technology: Yesterday Brazilian President Dilma Rousseff met with MIT president Susan Hockfield and signed two agreements between the School of Engineering and the Instituto Tecnológico de Aeronáutica, Brazil’s equivalent of the Ivy League. Both agreements mark the beginning of future collaborations as well as student, faculty, and research exchanges between both institutes.

Get a behind-the-scenes look at this annual, student-run fashion show.

“After spending some time with these students, I realized they knew more about running a business than I had in three years of having my own,” said Kao, after she received the Leadership in the Arts Award.

In addition to Kao’s collection, the show showcased womenswear and menswear from Derek Lam, Miu Miu, and Moschino, modeled by Harvard students — Clearly, the Ivy League can be as stylish as it is academic.

Check out some backstage and runway pictures from the event:

— Text and photos by Renata Brito 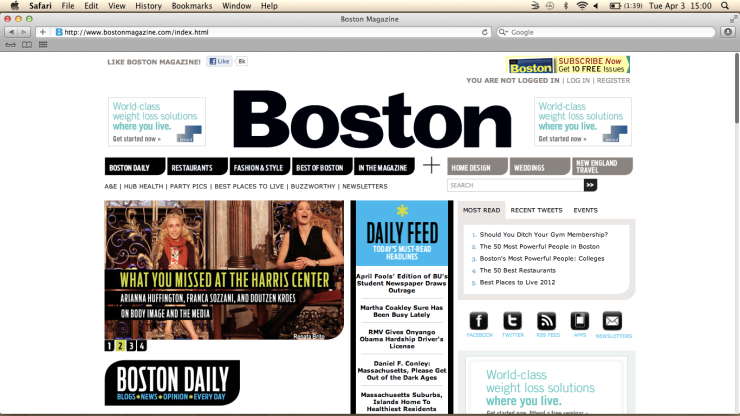 What You Missed at the Harris Center Public Forum Last Night

How to Make the Most of the St. Patrick’s Day Parade

Your guide to making the most of the day — green beer optional.

Everyone is Irish on St. Patrick’s Day, but that doesn’t mean we all want the same thing out of the famous South Boston parade, which rolls this year on March 18 with an expected crowd of 600,000. Here’s your guide to making the most of the day — green beer optional. — Renata Brito and Madeleine J. Coleman

Four rapes and seven sexual assaults. That’s the latest number of sexual offenses reported on Boston University’s campus this academic year. This statistic has been widely quoted by Boston news outlets debating the recent hockey team scandal in which two players were each accused of sexual crimes less than two months apart, the latest taking place on Feb. 19.

Welcome to the latest installment of Beauty Battle, where we pit two similar products — one high-end, one drugstore — against each other to see which one reigns supreme. This week, we’re testing two face illuminators: Benefit’s Watt’s Up Soft Focus Highlighter and L’Oreal’s Magic Lumi Highlighter.

Rolling Stones’ fans: get your seats … at the Boston Ballet.

Today through March 11, Play with Fire, composed of three contemporary ballets each created by European choreographers, will have the company twirling and jumping to the sound of Bach, Baroque music and the Stones. And yes, there actually will be fire.

Opening with Sharp Side of Dark, by Finnish-born resident choreographer and costume designer Jorma Elo, four couples will enchant the audience with their fluid moves and acrobatics. Lighting is as quintessential as the dancers in this minimalist performance.

The supernatural journey will continue through Bella Figura, choreographed by award winning Jiři Kylián. “It’s a journey in time-light and space, addressing the ambiguity of aesthetics-performances and dreams. Finding beauty in a grimace — in a knot of the mind — or in a physical contortion. It is like standing on the edge of a dream,” said the Czech choreographer.

Wearing tulip-esque blood red skirts, dancers alternate between fast and slow paced movements giving a sense of detachment between body and mind in a surrealist set.

Last but not least, artistic director of the largest contemporary dance company in the United Kingdom, Christopher Bruce, will flashback to the 60’s disco moves with Rooster.

Rockin’ to the tunes of “Paint it Black,” “Ruby Tuesday,” “Lady Jane,” and other hits; gelled hair dancers in velvet blazers give a whole new meaning to ballet.

“It’s so different to what people associate ballet with, said Rachel Cossar who will perform in all three dances. “It has nothing to do with pink tutus.”

Boston’s Best Places to Live: What Kind of Real Estate Does Money Buy?